The word “stereolithography” comes from the Greek words “stereo,” meaning solid, and “(photo)lithography,” which is a form of ‘writing’ with light. Stereolithography with your 3D printer does exactly that: drawing solids with light one layer at a time.

There are three main categories of SLA processes, laser-based stereolithography (laser SLA), digital light processing stereolithography (DLP-SLA), and masked SLA (MSLA). For all these processes, a vat of photo-reactive liquid resin is selectively exposed to light in order to form very thin solid layers that stack up to create one solid object.

Even though laser-based SLA, DLP-SLA, and MSLA are all types of stereolithography and utilize similar technology, they can produce significantly different outputs. Understanding the subtle difference involved in each 3D printing process will help you know what to expect from your final builds, how to better design your production workflows and maximize the potential each type of machine, and make more informed purchasing decisions. Let’s dive into what exactly that means.

Laser-based SLA was the original means of stereolithography that was developed in 1986 by Charles Hull, co-founder of 3D Systems. The technology works by using a UV laser to draw each layer of the object and uses two mirrors driven by a motor, known as galvanometers or ‘galvos’ (one on the X axis and one on the Y axis), to rapidly aim the laser beam across the print area, solidifying resin as it moves along. In order to create a solid object the design must be broken down, layer by layer, into a series of points and lines that are given to the ‘galvos’ as a set of coordinates and the laser traces them out. Laser SLA Orthodontic 3D printer examples: FormLabs Form2.

DLP-SLA uses a digital projector to flash a single image of each layer across the entire platform at once. Because the image of each layer is digitally displayed, it is composed of numerous square pixels, resulting in a layer formed from small rectangular bricks called voxels that stack up along the Z axis. DLP-SLA Orthodontic 3D printer examples: Park Dental Research/Orchestrate Juell Flash OC, Envisiontec Vida, etc.

MSLA utilizes an LED array as it’s light source together with an LCD photomask in order to shape the light image from the LED array. Like DLP, the LCD photomask is digitally displayed and composed of square pixels. The pixel size varies based on how the LCD photomask is manufactured, and individual pixels are deactivated on the LCD to allow the LED light to pass through to form the resulting layer. Thus, the XY accuracy is fixed and does not depend on how well you can zoom/scale the lens as is the case with DLP. MSLA Orthodontic 3D printer examples: Structo Orthoform (4Qube is the US distributor). 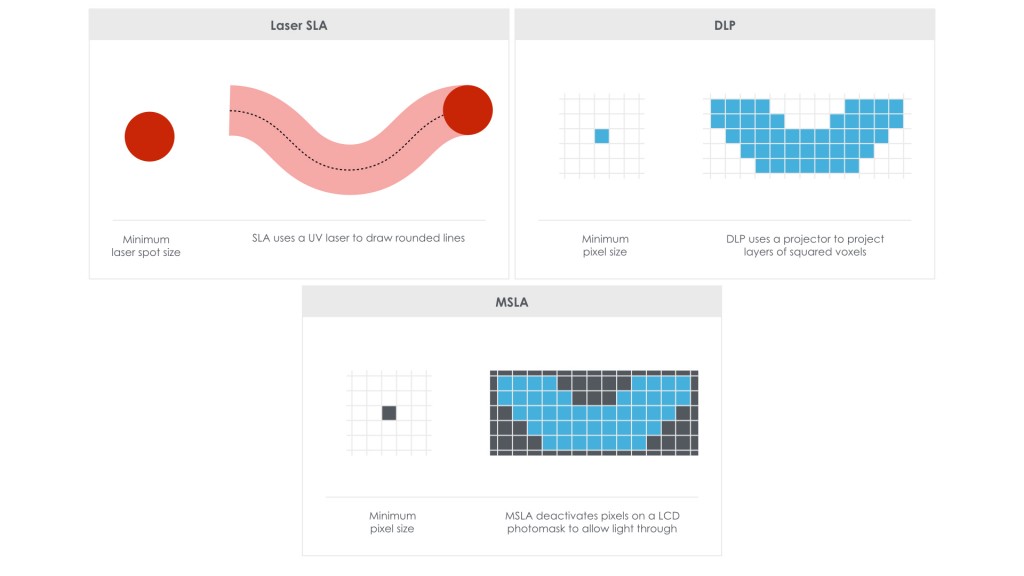 Layers draw by a laser and those build with voxels are quite different so it is difficult to compare laser SLA with DLP-SLA and MSLA by numerical specifications alone, but you can begin to understand the slight differences in the end products.

Print Size and Speed with Laser SLA, DLP-SLA, and MSLA

Since each entire layer is exposed all at once, rather than drawn out with a laser, both DLP-SLA and MSLA can achieve significantly faster print times than laser SLA. This increased speed is most noticeable with styles of 3D printing that allow for continuous light exposure, and when building certain kinds of objects. Hollowing out dental models with DLP-SLA and MSLA printers, saves material, but does not make a meaningful impact on print times.

For large, fully dense prints, where the print will fill up most of the platform, each layer is exposed significantly faster with DLP-SLA or MSLA than it would be if drawn out by a laser. Also when printing very small and finely detailed objects, where it would take a laser a long time to move along all the coordinates, DLP-SLA and MSLA can also build at a faster rate.

Although DLP-SLA and MSLA can build significantly faster, the speed of an individual printer becomes almost irrelevant when operating a 3D print farm at scale for digital orthodontics, capacity and redundancy are more important. Additionally, both DLP-SLA and MSLA can introduce tradeoffs in resolution and surface finish with certain types of prints.

DLP-SLA resolution depends on the quality of the projector, which defines how many pixels/voxels are available. For example, full HD is 1080p. The light source from the projector in must be focused to an image size in order to achieve a given X-Y resolution for each layer on the build platform. This can become a problem when printing numerous detailed objects together using small voxels. The projector only has a set number of pixels so in order to print in the greatest detail the projected image must be shrunk down. This can be managed with various means of optical correction, but as a general rule finer details on a DLP-SLA printer are best achieved by using a fraction of the overall build area, and large prints can only build at the coarsest resolutions for the projector.

With MSLA, the pixel size of the LCD photomask is set based on how it is manufactured so individual pixels can only be turned on or off to block the light from the LED array. They cannot be shrunk to attain finer detail and surface finish on small individual objects, and the light from the LED array cannot undergo any optical correction without a lens. The LCD units that mask the LED light are vastly less expensive than DLP projectors, which can be advantageous, but those cost savings are not always passed on to the consumer.

Laser-SLA print speeds tend to be on par with FDM-style (material extrusion) printers, but offer superior resolution and output quality and a wider range of materials compared to FDM printers. The general rule is that longer the path the laser must trace, the longer the print time, so hollowing out orthodontic models can reduce print times substantially. As opposed to DLP and MSLA, the print resolution of a laser SLA machine is completely independent of the build volume. A single print can be any size and any resolution at any location within the build area.

Naturally, because 3D printed objects are made of layers, 3D prints often have visible, horizontal layer lines. However, because both DLP-SLA and MSLA render images using rectangular voxels, there creates an effect of vertical voxel lines.

In the photo below, you can see these vertical voxel lines on the surface of DLP-SLA, MSLA sample print on the right as compared to the laser SLA print on the left.

Because the voxel unit is rectangular in shape, voxels also have an effect on curved edges. A good way to conceptualize this is to think about how you would build a round shape out of Lego bricks—the edges will appear stepped on both the Z axis and the X-Y plane. This is known as Voxel Effect and it can be seen in detail in the photo below.

For the purposes of printed orthodontic models that will be used to fabricate retainers, clear aligners, and other appliances, surface finish and voxel effect of the models themselves make little difference. Only the calibration of the machine and overall resolution of the printed model would matter. However, when it comes to direct 3D printed of intra-oral appliances like occlusal splints, dentures, pontics, etc. with the wave of biocompatible materials on the way, the quality of the surface finish may be very important to avoid having to do significant post-processing.

By understanding the differences in 3D printing technology and their outcomes, it’s much easier to select the correct 3D printing solutions and design an appropriate workflow for your practice. Register for free membership for access to a basic 3D printing workflow for your orthodontic practice using time-efficient cloud based tools.

*Images & Graphics adapted from FormLabs, I’m not an artist